Painted Turtles have been known to live up to 50 years. They can grow up to 10 inches in length, However, Western painted turtles rarely exceed 8 inches and southern painted turtles are not normally larger than 6 inches. Eastern and midland painted turtles usually do not exceed 7 inches. Males are generally smaller than females. In the wild, painted turtles are found in creeks, ponds, swamps, marshes, slow moving rivers and lakes, and can often be seen basking on logs and rocks or at the edge of a river bank.

Their range extends from the Pacific coast to the Atlantic coast of North America and from Northern Mexico to Canada. This makes them one of the most widespread species in North America. Painted turtles are extremely hardy and can cope with most temperatures, thus making them more suitable for housing in cooler climates. 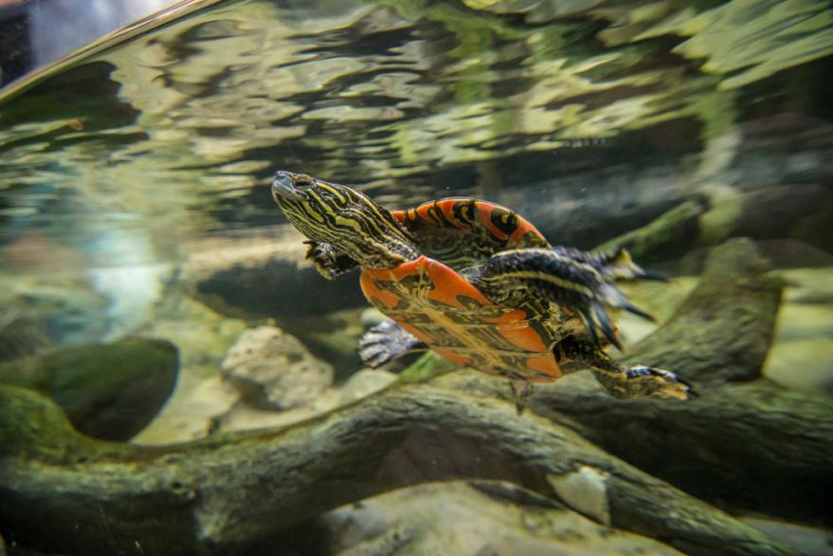 Hatchling Painted turtles can be kept in a 2/3 foot long aquarium. Adults however will require a much larger aquarium or ideally a pond. The water depth should be at least twice the width of the turtle’s shell. The water temperature should range between 22-26 degrees Celsius. This can be achieved using an aquarium heater. An underwater hiding place should be provided where the turtle can hide but cannot become trapped and drown.

A basking area is crucial, where the turtle can leave the water completely and fully dry off. The basking area’s temperature should be between 30-35 degrees Celsius. This can be provided by fitting a heat lamp to your aquarium. Painted turtles require UVB lighting to survive. UVB provides the turtle with vitamin D3 which then enables the turtle to absorb Calcium from its food. Without Vitamin D3 the turtle will develop metabolic bone disease (MBD) and eventually die. This can be provided by using bulbs which emit UVB which are readily available from any pet shop.

Water quality is very important as the turtles can develop health issues due to inadequate water quality. One way to help ensure good water quality is by using an aquarium or pond filter. External filters are generally more suitable than internal filters as they are larger, and the turtle cannot dislodge the filter causing it to malfunction. Frequent water changes are also necessary to ensure good water quality. Artificial plants, stones and logs should be added to the enclosure to create a more natural look and feel.

Painted turtles are omnivorous, so it is important to provide them with both plant and animal matter. Good foods include; fish, worms, insects, leafy greens such as dandelion and aquatic plants such as water hyacinth, water lettuce or duckweed. Furthermore, there is a wide variety of commercial turtle foods available. Hatchling painted turtles require higher levels of protein and calcium in their diet then adults. So, it is important to choose the food which has been formulated to provide optimum nutrition for your turtle’s growth stage. There are a number of vitamins and minerals which are crucial to ensure your turtles healthy development and wellbeing, so it is important to choose a turtle food with a wide range of Vitamins and minerals or add them using a multivitamin and calcium supplement.

It is important not to overfeed your turtle as it will have health implications. Overfeeding in turtles has been shown to cause liver problems, shell deformation and shortened lifespan. Hatchlings should be fed every 2nd day while adults should be fed approximately two times every week.

Painted turtles begin mating from spring upon emerging from hibernation. The courtship begins when the male and female come face-to-face. The male will stroke the females face and neck with his elongated front claws. The female will then return the gesture. The female will lay her eggs between late May and mid-July. Clutch size varies depending on a number of factors. Larger females lay larger clutches. Also, the four different species of painted turtle lay different sized clutches, with western painted turtles averaging around 12 eggs per clutch but can lay 20 or more. Northerly located painted turtle hatchlings have been known to over winter in their nests and emerge in the following spring.

Added to your cart: